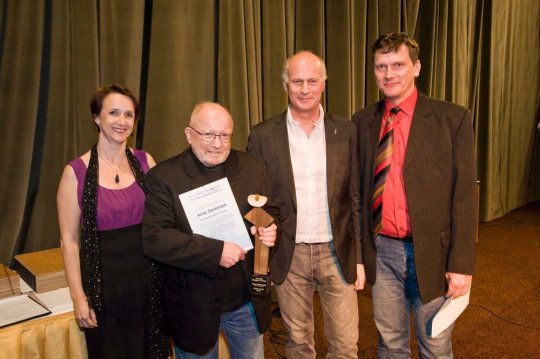 Arne’s history with bluegrass goes back to the early 1960’s when his brother, who played the tenor banjo in a jazz band with Arne on the drums, asked Arne, a smith by trade, if he could build him one and he wound up building 2, one of which, a long-neck Pete Seeger type, which still hangs in his famous basement.  The only measurements available were those of the fingerboard, since there were no 5 string banjos to be found in Denmark at that time.  He got little help to start playing from a visiting American, but since there were no instruction books, he learned to play the way many of us from that generation did, by listening to records and copying the playing.  When the Stanley Brothers came to Denmark in 1966, Arne was inspired by Ralph Stanley’s playing and developed his style in that direction.

There was little bluegrass music to be found in Denmark in those days, and so when some Swedish friends came through town with a stack of bluegrass records, Arne and long-time playing partner Svend Lauritzen spent hours copying the LP’s over to the then modern reel to reel tape recorder.

In the late 60’s Arne, Svend and a mandolin player organized their first band, Mama Hubbard’s Children and began playing jobs in the Copenhagen area. The named was later changed to “Græshopperne” (The Grass Hoppers), in 1971.  They played frequently at the well-known Vise Værtshus in the famous Tivoli Gardens, and also got a few jobs playing on local radio and TV Shows,.

They made a recording with Danish versions of “Bury Me Beneath the Willow”, and “Homestead on the Farm”, which actually was number 5  on the Danish Pop Hit list in 1ate 60’s.  They also played backup music for the Danish pop singer Bent Verder, whose songs frequently went to the top of the pop list.  They also played some jobs with the famous Danish musician Sebastian.

In 1972, they decided that they would sing in English.  In the early 1970’s, they also made regular appearances at the bluegrass festival in Oldenburg, and were invited to play at Tros’s Country Show in Uttrecht, and festivals in Groeningen and other places in Holland.  At these appearances, they met many of the original musicians that formed the foundation of European bluegrass.  A special appearance was in 1975 at the very first Tønder Festival, what is now one of the largest folk festivals in Europe.

As with most bands, the personnel evolved through the years, and at the peak of their success, the band toured in the US twice, in 1987 and 1992, playing many Midwestern festival and touring in a school bus painted blue!  The band still gets together to play, but has cut back on their performances.

Never one to stand still, in the late 90’s, Arne joined with some of the local musicians, and formed the group Special Blend. The group plays in a more modern style and has played many venues in northern Europe, and is still very active. And recently, as a result of weekly jam sessions in (where else?) Arne’s basement,  he is playing banjo with a new group, The Basement Bluegrass Band, which relies heavily on traditional material.

In addition to a long career playing banjo in these bluegrass bands, Arne has long been the driving force behind arranging and promoting bluegrass concerts in Denmark.  In the 1970’s, other bluegrass bands began to play in Denmark, but there was little cooperation between them. In 1979, the owner of a local record store, Claus Helgren Larsen, held a jam session in his store for all the local bluegrass musicians.  The event was popular, and continued on a monthly basis.  Arne saw the value of cooperation, and together with Claus, in 1980  they organized the first bluegrass organization in Denmark - OCBID (Old Time Country and Bluegrass in Denmark): with Arne initially acting as Treasurer.  He eventually became OCBID chairman. This group evolved into the current organization, Bluegrass Music In Denmark.  Arne has served as chairman of this latter group since its formation, which holds its meetings in Arne’s famous basement, on the walls of which hang a multitude of autographed pictures of bluegrass stars from around the world, and which houses an extensive collection of bluegrass books, magazines, tapes, LP’s and CD’s.

About 1980, he began co-organizing an annual 3-day festival at the local venue, Vognhjulet (Wagon Wheel). primarily with Danish bands. This involved all aspects of the organization and operation of the festival. Arne began arranging and promoting local concerts, and an impressive list of bands has played in Denmark as the results of his efforts, some of the very first performers being Hot Rize, Lost and Found, Spectrum and Dan Crary, Bill Keith, Joe Val, Tom Paley, Red Rector, Bob Paisley, Border Ride.   At one of these concerts, when David Grisman was in the band, Arne arranged for David to meet one of his idols, the famous Danish jazz violinist- Svend Asmussen.  Especially in the beginning of this work, when money for lodgings for visiting band members was scarce, Arne’s home became a boarding house place for some of the biggest names in bluegrass, which is attested to in the pictures covering the wall in his well-known music room in the basement.  Later, when Vognhjulet closed, Arne was instrumental in convincing local venues to hold bluegrass concerts, and succeeded in arranging concerts with such stars as Berline, Crary, Hickman, Del McCoury’s. Bill Clifton, Tom Gray, Tony Trishka, Bob Paisley Bill Grant and Deliah Bell, Bluegrass Unit, Bebe Gambetta. Much of this was done in cooperation with Rienk Janssen from Holland.  Also many of the most noted bands in Europe have played in Denmark, due in no small part to Arne’s efforts.

Since Bluegrass Music Denmark (BMD) was started in about 1990, Arne has served as the chairman.  He remains extremely active in negotiating concert dates with the venues, and contacting bands for the series of 10 concerts held in Copenhagen each year.  As well as playing, a major effort in the visits to many bluegrass festivals in Europe throughout the year is to find new bands to perform in Copenhagen. Eventually, BMD found a venue where they could hold regular concerts, and were successful in obtaining financial support from local cultural funds.  This is the pattern that currently exists, and Arne is still deeply involved in setting dates, contacting bands, doing sound checks, and anything else that needs to be done with these events.

For several years, Arne has attended the big IBMA convention in the United States, and in addition to enjoying the music and being inspired, he has established contacts with American bands and musicians, which has helped to facilitate some of them visiting Europe.

Although Arne has played the banjo for over 40 years, he hasn’t stopped learning and developing, and continually finds new tunes for those of us who play with him to learn, and also plays a little mandolin.  His is also always pushing the limits, experimenting with new ways to play things.

Arne has been extremely active on the Danish and international bluegrass scene, and it goes without saying that without his efforts, there would have been very little bluegrass in Denmark.